Not Sleeping Straight Through The Night?

By far the most common problem we see during our public stress screenings has to do with sleep. Whether it's having trouble falling asleep, not staying asleep, or waking up to early, it seems to be the problem of the 21st century. Not sleeping straight through for eight hours is the most common complaint.


New research may give many people a newfound sense of peace about their sleep, as it appears that it is not natural to sleep in one chunk of eight hours. Dr. Mercola just published a good summary and some helpful tips for enhancing sleep no matter what the issue.
Posted by Dr. Connie at 4:54 PM 0 comments

The theme this month seems to be on the chemical leg of our three-legged stool of health. Most people seek chiropractic care because of chronic pain. Every day in our office we address this problem through the structural leg of the stool, but your stool is going to topple over if you neglect the chemical leg.


The toxins in our environment (including heavy metals) create a chemical chain reaction that leads to chronic tissue acidification and inflammation (pain). All organ systems in your body are affected by toxins, from your brain to your left big toe, and everything in between including the following:


If you would like to (1) find out whether you are toxic and (2) do something about it (natural, drug-free), contact us today. As an added incentive (as if the above list of protential health problems weren't enough!), the first five people to request the test will receive a 50% discount (from $35.00 to $17.50) plus 10% off a bottle of the supplement for detoxification.
Posted by Dr. Connie at 11:28 AM 0 comments

A respected pioneer in the field of heavy metal detoxification, Dr. Dietrich Klinghardt, MD, PhD, has determined that there is a direct correlation between stored toxins and infectious pathogens. He states that “for each equivalent of stored toxins there is an equal amount of pathogenic microorganisms in the body.” The presence of stored toxins causes immune system deficiency that supports the growth of pathogens such as bacteria, viruses, fungi, and parasites.

The term Toxic Body Burden (TBB) is now being used in reference to toxic heavy metals, synthetic chemicals, and pathogens that enter and accumulate in the body. Retaining and restoring vibrant health requires an effective two-pronged approach that can detoxify toxic substances while simultaneously eliminating infectious microorganisms.
Zeolite - Removes Toxins Naturally
Natural zeolites are a class of crystalline, hydrated alluminosilicates of alkali and alkaline earth cations, having three dimensional structures. Most common natural zeolites are formed by alteration of glass-rich volcanic rocks (tuff) with fresh water in playa lakes or by seawater.

For thousands of years, civilizations throughout the world have used zeolites as a traditional medicine. Zeolites are now used extensively in various industrial applications based on their properties to act as catalysts, ion exchangers, adsorbents, and detergent builders.

The specific type of zeolite that has the most important health benefits is Clinoptilolite. Clinoptilolite is so effective in binding toxins that it was given to victims of the Chernobyl explosion to ingest in order to bind the radioactive isotopes that were released and thus reduce radiation levels in their bodies.

What makes Clinoptilolite so unique is its negatively charged, cage-like, honeycombed structure. When ingested, this natural mineral attracts and irreversibly binds toxic heavy metals, chemical elements, and free radicals and is then excreted through the urinary tract. This process is called chelation.

One of the most significant benefits of Clinoptilolite over other chelating agents is its affinity schedule for toxic heavy metals. Clinoptilolite binds with mercury first and lead second, moving on to additional positively-charged toxic heavy metals and chemical toxins which may include pesticides, herbicides, plastics, and even radioactive particles without removing precious nutrients such as calcium and magnesium.

• Clinoptilolite has broad-spectrum antiviral properties: first, by attracting and binding viral sub-particles, thereby interfering with viral replication and eliminating them from the body and second, by inhibiting viral proliferation via immune modulation of T cells.

• Clinoptilolite may help to eliminate carcinogenic toxins from the body, especially a category of carcinogens called nitrosamines. The most common sources for these nitrates include processed meats, cigarettes, and beer which are linked to pancreatic, stomach, and colon cancers.

We carry Zeolite in our office and are offering a 10% discount through Friday, June 8. Contact us to reserve your bottle today.
Posted by Dr. Connie at 12:49 PM 0 comments

We are proud providers of New Health Centers. To schedule your Massage Package with Pain Evaluation, please call 206-409-9447. We look forward to helping you feel better fast! 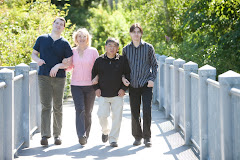 Dr. Connie
Seattle, Washington, United States
I've been a chiropractor in Seattle, Washington, for over 25 years. During that time I have been blessed with the opportunity to serve the wellness needs of thousands of patients, as we have grown and explored the possibilities of optimum wellness together. It is my patients who lead me to continually expand what hands-on work can accomplish for all levels of body, mind and spirit. As a complement to my chiropractic practice, I recommend and promote health products that I find to meet high standards of quality and value. My outside interests range from eating organic, local food to creating works of ritual theater, from downhill skiing to going to the movies, and from walking with friends to Sunday morning coffee/tea with John and a newspaper. I grew up on a dairy farm in Minnesota, ventured to Minneapolis/St. Paul, Lincoln, Nebraska, and New York, New York before settling in Seattle with my husband, John Kanetomi. We have two sons, ages 23 and 18; the older teaches Aikido with John, and the younger attends the Foster School of Business at the University of Washington.